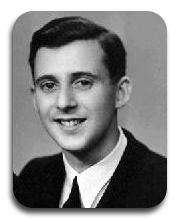 We report with great sadness that Frank Forster passed away peacefully on 7th July 2005, just a few days before he was due to lunch with the Queen and WW2 Veterans at Buckingham Palace. He was aged 89 years.

Frank was born in Portsmouth to the third generation of a naval family on 1st July 1916. He had two brothers and a sister and was educated at the Portsmouth Southern Secondary School.

He joined Fisgard at Chatham as an EA Apprentice on the 4th January 1932, and is best remembered by his classmates as a very bright apprentice who came top or second in his class throughout the four and a half year apprenticeship, without swotting or even appearing to try hard! As a result he was awarded six months advancement to Acting EA4 (Petty Officer rate), the maximum possible.

Whilst undergoing his Torpedo training at HMS Vernon, he featured on a famous pre WW2 cigarette card depicting life in the Royal Navy. Frank then served in the cruiser Glasgow, the battleship Howe and in the MTB base at Gosport. In May 1941, he lost his younger brother in HMS Hood and six months later Frank joined the new destroyer Panther, building on the Clyde. Whilst "standing-by" before she commissioned, he met his future wife Jean. Frank served in Panther throughout her two-year life, seeing active service in the Indian Ocean, Mediterranean and Aegean where, after being attacked by Stuka bombers, she sank. For his distinguished service during an earlier air attack on the ship off North Africa, Frank was awarded the DSM, a fact he modestly failed to mention to his classmates and many friends. After swimming out of the sinking destroyer in October 1943, he returned to the UK and to MTBs based at Hornet. He was sent out to the naval base at Sydney two months before VJ Day and remained there for a year before joining HMS Forth. Frank, Jean and their children Joyce and Alan set up home in Gosport before he was sent to the Mediterranean for two years in the frigate Magpie. He later served for nine months in the cruiser Birmingham and two and a half years in the carrier Theseus, before retiring from the Navy in 1956 as an EA1. When asked why he had not sought promotion during his naval career, Frank replied, with a twinkle in his eyes "I didn't want the extra responsibility and I loved each of my jobs as an Electrical Artificer".

After leaving the service Frank worked for the nearby Admiralty Experimental Works in Gosport where, in his words, he "played with model boats". After his retirement he had more time for his family and enjoyed life and the company of his family and friends. When Jean became ill during the 1990s, Frank lovingly cared for her throughout her debilitating illness until she passed away in 2003. He found solace at his sad loss in the company of his family and, just as his own ex-navy grandfather and mentor had two generations earlier, he enjoyed taking his grandchildren on "adventure trips" and to museums, to Greenwich and to London. Frank was a keen gardener and kept an allotment until he was well in his eighties and was always interested in new technologies. He often took machinery to pieces to find out how it worked and, like so many of his fellow engineers, did not always find it easy to put it back together again!

Frank was one of the earliest members of the Fisgard Association and never missed a social occasion. He also contributed a series of first-hand accounts of life at sea during World War Two that were published in successive issues of the Fisgardian and were very well received by the members. In each of these stories he modestly played down his own role, even failing to mention his war decoration.

Frank was a really nice man who always showed a genuine interest in his fellows. He will be sadly missed by his daughter and son, by his grandchildren and by all of his many friends and others fortunate enough to have known him.