We report with great sadness that Lieutenant Fred Pointer RN, the first ex-HMS Caledonia-trained apprentice to join the Fisgard Association, passed away on the 25th January 2013 aged 84. Fred was born in Gillingham, Kent on 29th October 1928. He passed the March 1944 national open competitive examination for entry to the RN as an Artificer Apprentice and joined Anson Division as an Electrical Artificer Apprentice at RNATE Rosyth on 1st August 1944. 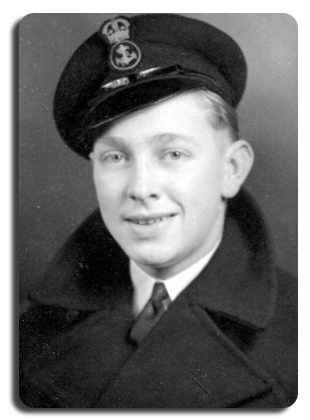 Fred was a cheerful and popular apprentice who did well throughout his apprenticeship in the workshop and at scholastic and technical studies and was a very good cross-country runner. He passed out of Caledonia in mid August 1948 as a member of the last class to complete all four years of their apprenticeship in Rosyth. He then joined the Torpoint-trained half of 1944 Anson EAs at HMS Collingwood as an EA 5th Class for the final year of his training. In July 1949, newly advanced to Acting EA 4th class (Petty Officer), and after a brief spell at London docks during a strike, he joined the Home Fleet cruiser HMS Cleopatra.

In his first ship, he was responsible for power generation and engine-room electrics for 28 months. During this period, whilst on a ‘run ashore’ in Margate, Fred, spotted (in Romeo and Juliette style), a lovely girl across the floor at a dance and so began the romance of his life. While Fred was serving in his next ship, the Depot ship HMS Berry Head, he and Jean were married at Holy Trinity Church Wimbledon. In December 1952 Fred joined the new Daring Class Destroyer HMS Delight, then under construction, and was soon sent for training at HMS Collingwood as the ship’s ‘Flyplane EA’, returning to, and becoming responsible for the setting-up and maintenance of the then new ‘state of the art’ Flyplane Mk 3 analogue gunnery Fire-control system whilst the ship was being completed. HMS Delight’s first commission was spent in the Mediterranean and Jean was able to spend some happy time with Fred in Malta during 1954. In January 1955, Fred took and passed the Med Fleet Board provisional exam for Chief EA at Gibraltar and on return to the UK in HMS Delight, looked after and instructed on the Flyplane system in Chatham Gunnery school, (except for the short course at Collingwood for confirmed Chief EA), until he passed the competitive professional exam and was selected for promotion to Electrical Sub-Lieutenant in June 1957. After completing the Promotion and Radio & Radar cross-training course at HMS Collingwood, he was appointed Electrical Officer of the Type 14 Frigate HMS Grafton in the Portland squadron in April 1958 and in 1960, during the ‘Cod War’, the ship was badly storm-damaged and nearly came to grief off Iceland.

From April 1960 until early 1962 he taught general electrics and mine-sweeping to artificers at Collingwood while Fred and Jean’s union was blessed with the birth of their son Mark. For a while in 1962, Fred served in the mine-layer HMS Plover before joining the cruiser HMS Lion for 2 years responsibility for all its High power equipment, and was promoted to Lieutenant, while the ship visited the Med, Far East, Australia, and Iberia. His next 2 years were spent in apprentice training at Collingwood, and in 1966 his daughter Lisa was born. In early 1967, Fred was appointed to the Admiral’s staff at Singapore where he was joined by Jean, Mark and Lisa. After two happy years there, Fred and his family returned to live in Fareham where he served in the Gyro-Compass and Navigational Aids training department in Collingwood until, in 1973 he was appointed WEO of the officer-training frigate HMS Penelope and, after 2 years in her, joined the staff of the Commodore Hong Kong as the base Electrical Officer. Jean and Lisa joined him and Mark, who was then at Embley Park School in Romsey, travelled out to join them for the school holidays and the whole family enjoyed a very happy time together. On return to UK in July 1977, Fred joined the staff of the Control School HMS Collingwood. Finally, in October 1978 at the age of 50, he became a ‘retired officer’ and was immediately re-engaged as an ‘RO’ and was employed in the training of Foreign and Commonwealth officers and ratings until his final retirement in 1994.

Fred had a quietly dignified and friendly manner, a keen wit, a great love for his family, and took all of the myriad tasks he faced in his stride. He was seldom if ever flustered, was always cheerful and was popular with all of his fellow officers and subordinates. He passed away peacefully after a short illness, in hospital on Friday 25th January 2013, surrounded by his family. His funeral service, held in St George with St Gabriel’s Chapel at HMS Collingwood on Friday 8th February, was attended by all of his family and more than 100 old friends, including a number of fellow members of the Fisgard Association. He will be sadly missed by all.