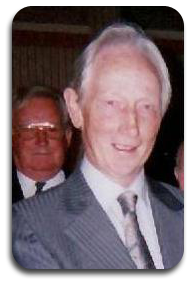 We report with great sadness that Gerry "Flash" Barker of 1944 Anson passed away calmly and peacefully on the 11th November 2003 after a brave fight with Myelo Fibrosis. He was aged 75.

Gerry was born in Devonport on 30th August 1928. As a schoolboy during the heavy air raids on Plymouth, he helped to fill sandbags, erect air raid shelters and assist street fire parties and became a Ministry of Information messenger tracing people missing after the Blitzes.

He joined RNATE Torpoint as an ERA Apprentice on 2nd August 1944 and quickly established himself as a boxer winning the Junior Flyweight title in December 1944. His tall slim figure and the lightning speed of his punches during that first of many finals earned him the soubriquet "Flash". He was also a keen footballer and cross-country runner, a talented musician and an ever cheerful and popular classmate.

In the autumn of 1947 he transferred to Rosyth and, on passing-out from HMS Caledonia in December 1948 as an ERA 5th Class, joined the battleship HMS Vanguard. He later served in HMS Ulster and, in the Persian Gulf in the frigate HMS Flamingo. He was landed at Malta from Flamingo, as a CW candidate, for studies prior to sitting the Sub-Lieutenant (E)s qualifying examination. His promising naval career was then suddenly ended when a routine X-Ray revealed that he had contracted TB and after being sent home to RNH Devonport, he was invalided out of the service.

During his convalescence he met and married Marjorie and decided upon a teaching career. He studied Divinity and English at St Luke's College Exeter and after teaching at Penlee School and other junior schools he took a post at Woodlands school for the Physically Handicapped. Here he taught a variety of subjects including music, for twenty years until he retired.

A devout Christian, Gerry was an active member of his church community and pursued many interests, playing piano, guitar and composing music. Members will remember the two stirring marches entitled "HMS Fisgard and HMS Caledonia" and "The RN Artificer Apprentices' March", which he composed and presented to the Association and which play members in to dinner at "Green and Whites". An accomplished writer, Gerry produced a valuable history of Devonport and has contributed to the Fisgardian. He was a witty speaker and his tale of a boilermaker's test job brought the house down at his class' 50th anniversary dinner. He also played badminton and croquet competitively and enjoyed dancing and Dartmoor rambling. Gerry was a very active supporter of the Association and travelled to many of the "away" functions. He attended and thoroughly enjoyed the Centenary celebrations at Portsmouth in March without mentioning his serious illness to his classmates.

Gerry will be much missed by his wife Marjorie, his daughters Karen and Sandra and by his five grandchildren. He will also be remembered with great affection by his classmates and all who had the pleasure of meeting and knowing this brave, friendly and kindly ex-boy of Fisgard.