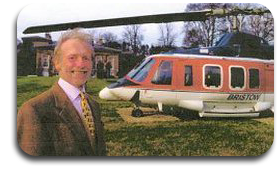 I wanted to tell you a bit about the late John Grantham, who you may remember as "Chief Hook" of Grenville Division. John died on the 25th of March, 2005, after suffering from cancer. I first met John when I went to Parkstone Sea Training School, a Barnardo home, he, being a year older, was already there and came from the Brighton and Hove area. John was an extremely bright and gifted boy, popular with Masters and other boys alike. I followed him to Fisgard, so he was in 4 class when I got there. John left to join Condor as an A/A app, became a commissioned officer and flew helicopters. He left the RN as there was little prospect of further advancement at the time. He worked as a pilot for the Saudi royal family, and also for Bristow's, serving North Sea oil rigs. 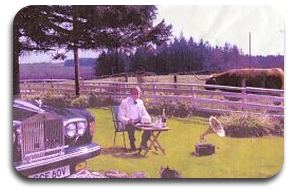 He lived on a small farm near Aberdeen, with his second wife Suzy, they kept highland cattle and he loved the area (see photo right). I made contact with him again, through the Friends Reunited site in 2002. He drove down to where I live in the New Forest, in a Rolls Royce of course, and we had a great time. John was an inventor, he starred on a TV show hosted by Trevor Baylis, and among his many inventions was the "mindless" shopping trolley, i.e. the one that you could steer.