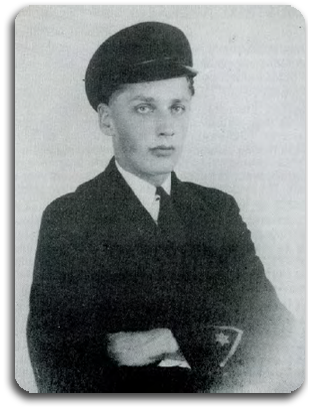 On the 16th August 1938 Tom joined the Royal Naval Artificer's Apprentice Establishment at Chatham to begin his 4-year Artificer Apprenticeship. Because of the war those years proved very eventful as apprentices were moved to different locations. Having been accommodated in a church hall, followed by a year in a girl's high school in Plymouth, he arrived at Torpoint in 1941 to complete his Apprenticeship. This was only disturbed by the bomb which demolished part of the main workshops. The remainder of the war years were spent in the 16-inch battleship, HMS Rodney, and then followed a succession of small ships and a 3-year spree with fleet repair ships based on Malta.

Commissioned as an Ordnance Engineer Officer in 1956, (the last of the “thin stripe” officers) he was transferred to Air Ordnance duties in Scotland and Northern Ireland until appointed to HMS Bulwark on her first commission as a commando carrier.

Promoted to Lieutenant Commander in 1966 whilst serving in HMS Defender on the West Indies Station he returned to HMS COLLINGWOOD as the Workshops Group Officer, thence to HMS Raleigh as First Lieutenant during the initial 4 years of the rebuild.

On retirement from the Active List in 1973 he joined HMS Fisgard as the Establishment Officer, managing a staff of just over two hundred civilians until Fisgard’s closure in 1983. Tom worked tirelessly to ensure that the redundant staff were found alternative employment. When the dust settled, the only person without a job was Tom himself.

Tom was Mayor of Torpoint from 1981-82 and in retirement proved an active member of Torpoint & Rame Peninsular Lions.

A Memorial service for Tom was held on 26th July 2013 at St. James Church, Torpoint, conducted by The Rev. Father MF Godfrey RN, HMS Raleigh. The service was well attended, with members of Torpoint & Rame Peninsula Lions very much in evidence. Tributes came from a variety of sources: Cdr. M. Harris, HMS Raleigh; Mike Pearn MBE, Mayor of Torpoint; and his two sons who survive him along with his second wife Anne.