We report with great sadness that Tom Harding passed away aged 82 years on 18th May 2005, two months before he was due to lunch with the Queen and WW2 Veterans at Buckingham Palace. 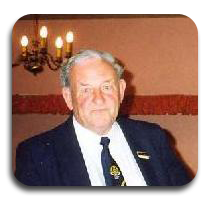 He was born in Plymouth on 4th January 1923. The eldest son of a naval man, he had two sisters and two brothers. Tom won one of only seven scholarships to St. Boniface’s College, Plymouth where he was educated until passing the open examination for entry to the navy as an Artificer Apprentice.

Tom Harding joined the Fisgard Block in RNB Chatham as an EA Apprentice in August 1938. At the outbreak of WW2, the Fisgard block moved from Chatham, first to Devonport and later to the purpose-built RNATE at Torpoint. Tom, thus became a 'native'. He had no problems in the classroom or workshop and became a popular CPO Apprentice, but he is best remembered as an outstanding sportsman, shooting for the RN and swimming and playing rugby very well.

After completing his apprenticeship and the EA's Qualifying course, Tom served in HM ships Kenya, Illustrious, Zealous, seeing active service in the Pacific and Atlantic. In February 1946, having met her at a dance in Keyham, he married Kathleen. This was to prove a very happy union that was to last for 55 years and to be blessed with a daughter Brenda and son Geoff. He later served in HM Ships Victorious, Nigeria, Eagle, Ark Royal and Pellew, and ashore in Malta, accompanied by his family. Throughout his naval career, he continued to play sports and to shoot and play rugby to a high standard.

He retired from the service, to Plymouth in 1963 as a Chief Electrical Artificer. After a spell working in the dockyard he rejoined Fisgard as a civilian instructor where, for 18 years, he enjoyed passing-on his skills to artificer apprentices. Tom also took up, and excelled at, bowls gaining representative honours at county level and an international trial.

Tom remained active in his retirement, continuing to enjoy the more leisurely sports and helping his family at home and on holiday. He and Kathleen travelled widely, visiting South Africa for a naval reunion, Australia, America, Italy and the Canary Islands. When his wife died in 2001, Tom moved to single accommodation near to his daughter and his brothers and sister. He walked a lot, particularly to the park overlooking the River Tamar where his favourite spot held fond memories of Kathleen. He kept his mind active by doing crosswords, playing scrabble with his family and, having quickly mastered the intricacies of computers, spent many happy hours on his PC keeping in touch with old school friends by E-mail. He also reported on the local bowls scene for the Plymouth newspaper and wrote hundreds of letters to his grandchildren and classmates. Tom played an active role in the local church and community, was a school governor, a founder of the 1938 Anson Association and organised their reunions. He was also a long-term member of the Fisgard Association and a regular attendee of its West country reunions.

Tom Harding was a friendly outgoing man who enjoyed a chat with his friends. A very popular classmate who will be much missed by all who knew him, not least by his family to whom he was devoted and who loved him dearly.