Ernie Cann was born into a naval family at Plymouth on the 27th November 1928. He was first educated at St James the Great Junior School before winning a scholarship to Sutton High School. He passed the April 1944 Open Competitive Exam for entry as an Artificer Apprentice and joined Anson division at RNATE (later HMS Fisgard) as an ERA Apprentice on 2nd August 1944.

Ernie, the only "engine-smith" in the class to complete the four years apprenticeship was a cheerful and popular member of his class, who did well at his craft and in his technical studies, was a renowned goalkeeper, enjoyed most sports and played an active part in all divisional activities.

After 'passing-out' of Fisgard in August 1948 as an ERA 5th Class, and (naturally) being a native of Plymouth, he was sent to a Pompey ship, the carrier HMS Warrior, the first of his four carriers. As an ERA 4th Class he served in the Far East during the Korean War in HMS Unicorn, and later in HMS Illustrious and HMS Eagle. This 20 years association with 'flat tops' was interspersed with service in the minesweeper HMS Puncheston, the Cruiser HMS Orion and the diesel-engined Frigates HMS Lynx and Salisbury. He also served ashore as an Instructor. His happy and successful career in the RN ended when, as a Chief ERA, he was retired early in the last year of his Twenty-Two year engagement on medical grounds, following a back injury. 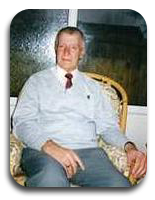 Thereafter he enjoyed a second career in the Civil Service Property Service Agency first at RNAS Yeovilton, then at American air bases in Oxfordshire and finally at RAF bases in Germany. On retirement, he returned home to Callington to enjoy his golf.

Ernie walked tall and proud throughout his seventy-nine years enjoying life to the full. He is remembered with great affection by his family and friends for many endearing habits including ending his statements in German and for his 'Dodgy' jokes. He had an eye for the ladies and was twice married and twice divorced but retained his sense of humour. His daughters fondly remember "long hot summers and trips to Cornwall knowing that if the car broke down our Dad could fix it and recall waking up early to the sound of seagulls tap dancing on the caravan roof, before rushing to the beach, while Dad got in a round of golf". 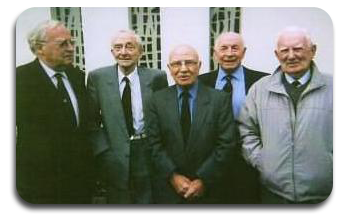 Ernie was a long time member of the Fisgard Association and a keen supporter of their local reunions where he enjoyed the company of kindred spirits. He firmly retained the old Anson Esprit and attended all of their class reunions. Five of his pals from his Fisgard days, pictured on the left Alan Westlake, John Turner, Rodney Tudor, Harry Edwards and Martin Field, attended his funeral on 31st January at Plymouth to say a fond farewell, to pay their respects to an old friend and classmate and to give their condolences and those of his classmates unable to attend, to his daughters Julia and Malena, his sister Ethel and their families.