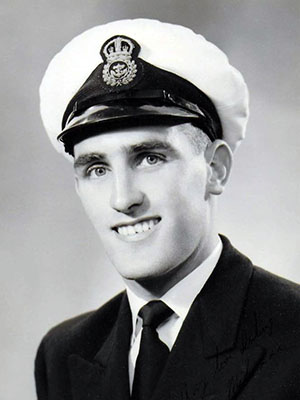 Michael John Large joined HMS FISGARD in September 1949 with Series Seven (Magnificent Seven) entry in Collingwood Division. After completing his Apprenticeship as an ERA, he passed out of HMS CALEDONIA (Benbow Division) on 17th August 1953.

He started his seagoing career in General Service on ships including HMS GAMBIA (1953) and HMS LOCH FADA (1959) before joining Submarines (1962) where he excelled and qualified as CERA.

Thereafter he served as Engineer Officer in Submarines:

He was promoted to Lieutenant Commander in 1976 and joined the Devonport Refit Group, with HMS OBERON and his last appointment was as Training Officer at HMS RALEIGH. He left the service in the summer of 1983.

After leaving the RN he worked for the Oman Navy, Seaplace Marine (Oil industry) and finally Devonport Management Limited (DML).

Mike retired in 1995, to Launceston in Cornwall where h e enjoyed his Golf, but the onset of Parkinson’s over the years increasingly limited his functionality until his peaceful passing in Launceston hospital on 29th March 2018.

Mike is survived by Audrey, his loving wife of 58 years, and proud sons Cliff and Chris, 4 grandchildren and a great grandchild.

He was a most honest, inspirational, loving and hard working person who will be missed by his close family, friends and all who knew him.