A eulogy given at Sam's funeral by his son Ian

Alan was born during a German bombing raid on 20th March 1941 in West Didsbury, Manchester, to shipping clerk Thomas and his wife Gladys. He would be the eldest of four to be followed by David, Linda and Trevor. He was baptised in Christ Church, West Didsbury, in April the same year.

He lived in Robertshaw Avenue, Chorlton-cum-Hardy; for those not familiar with Chorlton, it’s a 30 minute walk South from Old Trafford. Alan attended Amberleigh Prep School where he was Head Boy in 1952, and in the same year became the first ever Scout to enrol in the St. Barnabas Troop. He passed his 11+ and went to Chorlton Grammar School, leaving in 1957 with GCEs in Maths, English and Science. He earned his pocket money as a paperboy and at weekends, by working as a Butcher’s Boy at Neal’s – think Granville with the basket on the front of the bike. His mentor in his formative years was his beloved Uncle Eddie; Alan worshipped him and would never go back to the northwest without vising him and his Aunt Lily.

He flew the nest and joined the Royal Navy at Fisgard on 6 Jan 1958 and at the same time, a young Irishman moved into lodgings just down the road in Aycliffe Avenue, Chorlton – more of him later. During training, Alan picked up his Service moniker of Sam, and unbelievably only last week did his family get to know where the name came from, thanks to a visit from Richard Chaplin who had taught him for a time. After training for 5 years as a Radio Electrical Artificer at Collingwood in Hampshire and at Lee-on-Solent, Alan graduated in 1963 as a Pinky. A part of his training included 8 months at Culdrose where during a run ashore in September 1961, he was to meet Helen Reynolds in the Winter Gardens in Penzance; there was a spark.

Alan and Helen married on 29th December 1962 at St. Peter’s in Newlyn, followed by a grand reception at 5 Charles Street. The winter of ‘62-‘63 was a shocker, where in England you’d have to go back to 1739/40 for anything colder. As a consequence, nobody from Alan’s family made it to the service.

They set up home in a literally frozen Admiralty flat in Lee-on-Solent. In May 63 Alan moved to Portland, but without a married quarter Helen went home to her mum in Newlyn, and in July Colin was born at the Bolitho; do the maths – there was no chance of waiting for the snow to melt! After another short tour to Lee-on-Solent and a return to Portland, Ian was born in Weymouth in November 64. The family was complete.

Alan’s career now entered a phase of a succession of shore-based and sea tours that were to take him around the world; Capetown, Freemantle, Kobe, Mombasa, Suez, Aden, Hong Kong and Jakarta. Helen got to meet up with Alan in Singapore for 10 days in 1970, flying out via Cyprus and Bahrain with the RAF – not bad for a Newlyn girl’s first trip abroad. 820 Sqn on the Eagle for 14 months, Bulwark for 10 months. Returning from the trip on Eagle, Ian didn’t recognize him.

During a shore posting at Portland, Alan found himself at Wembley on 29th May 1968, where the lad from Aycliffe Avenue scored one of 4 goals for Manchester United that saw them beat Benfica and become the first English team to win the European cup. If you were a son of Alan Barnett and visiting Chorlton, you were taken to Aycliffe Avenue, just to pay homage to the house where George Best used to live.

But long separations with 1960 communications, poor admiralty housing and low pay for the Services at the time made for a hard existence, particularly for those left at home. Putting family first, Alan left the Navy in 1971 and took a role back in Manchester as a Technical Author. The job was dull, Helen couldn’t settle and Colin hated it. They reassessed their options. The Navy were desperate for experienced engineers and by jumping back in the frying pan they could relocate back to Cornwall. Alan re-joined the Navy less than 2 years after leaving, having been offered his old rank and seniority, and the family set up home at 22 Faugan Road. The trips away re-started, but they were less frequent and shorter giving Alan long periods of shore time stability at Culdrose. 824 Sqn on the Ark Royal, 706, 737, 700H, Bulwark, Hermes, Olna, Argus. If you remember watching the BBC series Sailor in 1976, “I am Sailing” by Rod Stewart, Alan was on the Ark Royal then. More world travel; Lisbon, Puerto Rico, Norfolk Virginia, Naples, Gibraltar, Malta and many more.

In the Autumn of 1981 the children left home, Colin to Salford University and Ian to join the RAF. Not the Senior Service, but the RAF. In the years to follow and for the first time, holidays as just a couple followed; Salzburg, Malta and The Lake District. Later, trips to visit the now married children; Brussels to visit Colin and their brand-new granddaughter Kayleigh, then north to Kinloss to visit Ian.

Finally, in April 1991, Alan left the Royal Navy having served over 31 years. But leaving his treasured GCA truck was simply beyond him, so he took the helm as the Culdrose ground radar migrated into the public sector under Hunting Aviation. Sadly, the fun had gone out of it. Contractorization brought new ways of working that didn’t align with the Service ethos he’d lived and breathed forever, so in the summer of 1999 he finally threw in the towel and retired. He’d earned it.

On leaving the Navy, Alan threw himself lock, stock & barrel into serving the community at Paul Church, eventually taking on the ever-demanding role of Church Warden. But it didn’t stop or start there; verger for funerals, chauffeur for Luncheon Club, the Pretty Committee or just a helping hand or receptive ear for anyone that needed it. He liked nothing more than being told his loop system wasn’t working after Sunday Service – some of the words on offer weren’t very Godly. He committed to and thoroughly enjoyed the sense of community and shared faith, he’d been an alter boy back in Chorlton, but his own faith burned as bright now as it ever would in his life.

Alan enjoyed quite a chequered career on stage. He played Barabbas twice in the Paul Passion play and appeared as Baldrick in an Elizabethan dinner in 1995. He was an Ugly Sister in a rendering of Cinderella and a sailor (type-cast) in a group of six singing “There is Nothing Like a Dame'. He was one of the Supremes, spangly dress, wig and, very non-PC, blacked-up, singing ‘Baby Love'. One of two old women in a sketch with Goff Johns, and gave an excellent routine where he described 'Giving a Cat a Pill’. He was worthy of an Oscar. Finally, he was ‘soundman’ for several productions by the St Peter’s players.

At home, his garden was an all-consuming passion and Monty Don his idol. He studied, planned and nurtured, lamenting the Cornish weather one day, praising it the next. He sowed, pruned, and potted-on. Suttons loved him!

As Alan’s health deteriorated, his attendance at church waned and Colin being diagnosed with cancer crushed him. He did his level best to be positive, but it was clear to those close that his heart was broken. At the end, it was a relief and the start of remembering the man for who he was.

So what’s left after Alan’s departure? Well, let’s start with his shed. As you would expect with Alan, it’s really two sheds, but with just one door that doesn’t quite fit. It’s fully plumbed and wired, just not brilliantly. It is littered with, well, litter, and a million artefacts, each with their own story. Dozens of tools, many never used by Alan. They were his father-in-law’s who was a chippy, but he couldn’t see them thrown away when he passed on. Bakelite electrical fittings, a bottle of Newquay Steam Bitter from 1998 and the knobs off the cooker that was bought on moving to Newlyn in 1972. Nothing else, just the knobs. A magnet from a radar. An AVO multimeter he’d pinched from work and hundreds of discrete electronic components, still in their packaging with NATO Stock Numbers. You never know when you might need a 330K 2 watt resistor. But don’t laugh. Besides keeping the Fleet Air Arm airborne, this man could fix tellies, record players and even Decca Navigation systems off Newlyn trawlers. When CB radios came to the fore, remember them? He could fix them too. He was a very cool dad.

His boys were immensely proud of him. He was always supportive, allowed the freedom to explore and always led by example. He instilled old-school values, taught right from wrong and stood by his strapline that if a job’s worth doing, it’s worth doing well. Comfortable but never really flush, he would gladly give you anything he had to get you out of a hole, regardless of how you got yourself there.

He loved Cornwall and the Cornish, crosswords, liquorice, Hannah Gordon, the younger generation that so many choose to malign, and new technology. He didn’t like social inequality, Angela Merkel, people that park outside Jelberts or scousers. In a nutshell, the world isn’t quite as good as it was 2 weeks ago on Saturday. 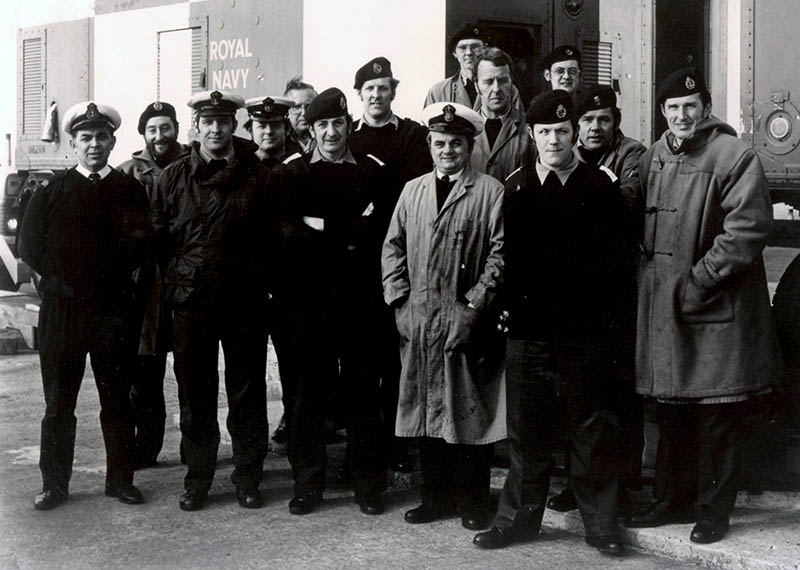 Sam at Culdrose (front centre, hands in the pockets of his dust coat).