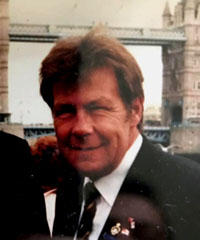 Sad to report that Keith Frank Sollick, D091904 crossed the bar with his family by his side on 3rd July 2019 after a short battle with cancer. Keith joined HMS Fisgard on 6th September 1965 with Series 55 and was in Hawke Division. He passed out as an Electrical Weapons Artificer Apprentice and continued his apprenticeship at HMS Collingwood.

He served in many surface ships including HMS Charybdis and was a member of FWES at HMS Excellent in Whale Island. Keith was a well respected and liked divisional chief, firstly returning to HMS Fisgard in 1975 as Div Chief for Bennett Division then later in HMS Defiance at Devonport.