Creation of the Standard

Over the last few years, the lack of an official standard has prevented the Fisgard Association from having a prominant presence at deceased members' funerals and veterans parade and Remembrance services. This anomaly was discussed at length by the Association Committee, and the creation of a Fisgard Association Standard was ‘agreed in principle’. 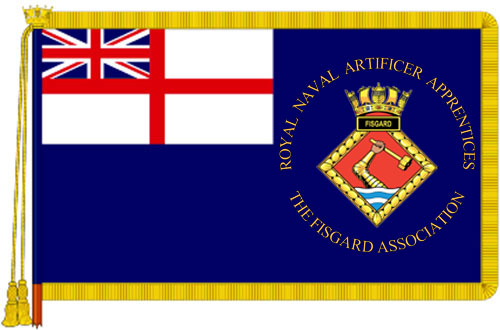 Committee Member Andy O’Brien, 731 Entry, was asked to investigate the creation of a design to the 'Royal British Legion standard’ and submit a number of designs for review by the Committee. This was completed in February 2020 and from the four suggestions submitted, the final selection was made.

Andy, was then asked to source a company to tender a quote for the manufacture of a standard, along with the necessary ceremonial paraphernalia for use at parades and members' funerals.

Newton Newton Flags Ltd were chosen as a result of recommendations from other Royal Navy Associations that have had prior dealings with the company. It was noted that Newton’s are the only UK company making hand-made flags in-house to a high standard without printing. They do a sizable amount of work for and with the Royal British Legion and had sewn over 350 scrolls to RBL Standards after the GP90 parade 2018 in 2 weeks.

Their quote of £1,260.00 was very competitive and approval to go ahead was given by the Committee in July 2020.

The lead time for manufacture was estimated at six weeks with a collection date of 20th October 2020 (Covid-19 permitting). The final cost was £1,236 VAT included.


Collection of the Standard

Andy collected the standard on behalf of the Association from Newton’s near Skegness in Lincolnshire on 20th October 2020. Tracy, who runs the business along with her sister, went to great lengths to ensure that everything we need as an association for ceremonial purposes (including funeral bows) was provided.

The Standard was inspected in their reception and found it be of excellent quality and construction.

To conclude, the Fisgard Association now have a standard and at least one bearer ready to attend at the funeral services of members who have ‘Crossed the Bar’ and represent Royal Navy Artificers at parades such as National Armed Forces Day and Remembrance events.

If you have thought that far ahead, and would like a Fisgard Association presence at your service then please let your family know your wishes so that they may contact the Association Secretary when the time comes, to request our attendance and pay you the proper respect at your funeral.

Ongoing, there will be a requirement to get the standard properly dedicated but due to the current Covid-19 situation this will be put on hold until conditions improve. Dedications usually take place in a church setting and we are considering a service at St Ann’s Church in HMNB Portsmouth (subject to approval) or the National Memorial Arboretum.

Message from the Chairman

It gives me great pleasure to inform you all that Julia Johnson, the daughter of our Founder, Bruce ‘Bing’ Balmain has kindly funded the cost of our new Fisgard Association Standard.

This is an extremely generous gesture by his daughter, which, along with the Balmain Golf Trophy Competition each year, will keep Bruce’s memory alive. Accordingly, I have today written a letter of thanks to her on our behalf.

He was elected as the inaugural Chairman of the newly formed Fisgard Association for Royal Naval Artificer Apprentices in December 1996 and went on to become our Lifetime President until he Crossed the Bar in June 2013, aged 87 years.

Click here for a full précis of Bing’s service in the RN with his Obituary.